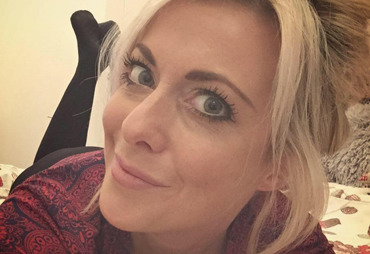 My Fight with IBD: How My Ileostomy Helped Me Win

My ileostomy story began 12 years ago when I was working as cabin crew on a helicopter. The training involved a three-day first aid course, which I remember feeling nervous about. During that course, my stomach started to make gurgling sounds, but I had no idea how life-changing that moment would become. It was like a switch flicked, a switch that had always been there but had been dormant.

That night, I lay awake with stomach pain and diarrhoea. For the next two weeks, I felt awful. I assumed it was a stomach bug and waited for it to settle, but when I noticed blood in my stools, I panicked that it could be more serious. My mum made sure I went to the doctors, and suddenly I was having all sorts of uncomfortable tests. I was 21 years old with no idea what was happening to my body, and the whole situation was distressing. Even now, I find it difficult to think about that time.

A colonoscopy revealed that my problems were probably being caused by ulcerative colitis (UC). The consulted painted a rosy picture of the future, where I just needed to take good care of myself. I left hospital with a steroid prescription, feeling elated that it was nothing serious. I was so naïve back then. Little did I know that over the following few years, I’d become an expert on UC.

My condition stabilised and remained steady for two years. I was still taking steroids intermittently and being careful with my diet, but I was managing. When I became pregnant with my daughter, my UC flared up again. My steroids were increased to a higher dose, which made me worry about my baby’s health, but the doctors assured me that it was the best way forward.

My daughter Lauren was born slightly prematurely, which I have heard is common with UC mothers. I started to go to the toilet more often and I knew my health was deteriorating. I was losing weight, getting stomach cramps and bleeding. Less than six weeks after giving birth, I was wearing my size 8 clothes again. People told me that it was amazing how I had lost my baby weight so quickly, but I knew something was wrong.

Eventually, I was hospitalised. Lauren was six months old, and leaving her broke my heart, but I knew I was too weak to look after her. It took lots of steroids and bed rest, but my UC was brought under control and I was able to go home. In the back of my mind, my condition was always there, just waiting to rear its ugly head.

I wish I’d been more strict about my diet or tried harder to find out what triggered my condition, but it’s easy to say that with the benefit of hindsight. I really believe that stress and lack of sleep can have a major impact on your health. Of course, as a new mum, I was suffering from both of these, which I think might have contributed to my flare-ups.

Lauren’s first birthday arrived, and I didn’t feel I was getting better. I was still losing weight and I could barely leave the toilet. The steroids weren’t effective anymore, and I was thoroughly fed up. When I was offered an ileostomy, I jumped at the chance. It was still difficult to be apart from my baby, but my stoma would allow me to fully enjoy my time with her. Since my operation, I feel that I’ve been able to gain control of my life. There have been tricky moments, but I’m not in pain anymore.

The best advice I can give to other people struggling with their health is to try anything (within reason!) until you find what works for you. I truly believe that illness can be brought on by stress, worry and anxiety, so I advise you to be as happy and stress-free as you possibly can! Try to eat well and sleep well, and hopefully, it will be easier for you to fight off your illnesses. In the future, maybe there will be a scientific breakthrough to provide us with all the answers we need. If you’re struggling with IBD, keep fighting and don’t be beaten.