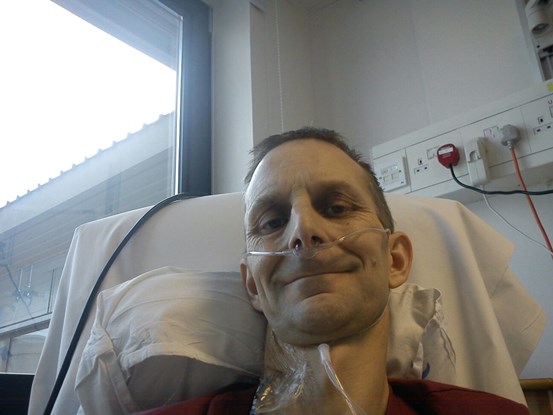 My Fight with Bowel Cancer

My stoma journey began in April 2010 after surgery for a hernia. I expected to feel better after that operation, but when I continued to lose weight, I knew something was wrong. I looked so gaunt that people kept asking if I was okay.

In November of the same year, I had an endoscopy. The doctors told me that they had found a tumour in my bowel. My older sister passed away from cancer of the cecum in 1995, aged just 32. I knew straight away that it could be the same thing, and that there was a chance I could die. I had a choice to either give up or fight. I chose to fight.

The doctors moved quickly. My GP gave me pain relief and within five days of the endoscopy, I saw a specialist colorectal consultant. My brother came with me to the appointment, where we were told that the tumour had been found in the cecum and was cancerous. I would need an operation before Christmas.

It was an exhausting time, full of hospital trips and tests. I had an MRI scan which showed that the cancer might have fused itself to my bladder. A cystoscopy (a tiny camera inserted into the urethra) confirmed that this was the case. There was a chance that my bladder would need to be removed, as well as my large intestine. I tried to focus on the positives, and once the cancer was gone, I could get back to normal.

Because of what happened to my sister, I kept my parents and siblings informed throughout. I deliberately delayed telling my four children until I knew what treatment and operations I would have. That was a very difficult conversation. My colleagues were told shortly before I left work for the operation. I wanted them to act normal, with no fuss or sympathy, and most respected my wishes. When two of them insisted on a hug, I told them ‘’I’m not dead yet!’’ I knew I would have to have a stoma, and two of my good friends in the office put post-it notes on all my things with ‘’bagsy this’’ and ‘’bagsy that’ written on them. It really lightened the mood.

The Day of My Surgery

At 9:30 on the morning of my operation, I was sat in the pre-op room, anaesthetic being injected into a cannula in my hand, and the epidural being prepared for pain relief. The next thing I was aware of was the doctors saying ‘’Billy, Billy, are you alright?’’ I asked if my bladder had been removed and they told me that, yes, it had, along with my large intestine and prostate. My world sank.

I had chemotherapy for the next six months. I was like a zombie during the treatment. Eventually, I visited the oncology unit at the hospital to see the consultant. He had the biggest smile on his face as he told me ‘’All the tests show no evidence of any spread.’’ Since that day, I have continued with my positive attitude. I think part of my positive outlook came from GPs, consultants and nurses that I encountered.

Since my illness, I have lived life to the full. I enjoy mountain biking, hill walking, scrambling, gorge walking and my favourite, rock climbing. Anyone who is going through their own journey with bowel cancer should know that anything is possible. I have discovered that I have an abnormal gene, as my late sister did. It is called Lynch Syndrome, and means I am at an increased risk of developing cancer. In the future, I might have another fight to deal with, and if I do, I will face it head-on.