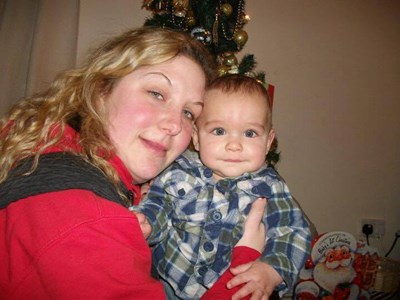 Before my stoma surgery, I became a single mum. Being a working, single mum is a tough job. Being a working, single mum with a chronic illness is crippling. In 2010, my son, Teddy was born and became the light of my life, but my inflammatory bowel disease (IBD) cast a dark shadow. I had been diagnosed with Crohn’s/colitis the previous year and I was living with constant pain and trips to the toilet, as well as chronic fatigue. Before my stoma, I sometimes didn’t reach the toilet on time, and I got so tired that I couldn’t talk properly. It was exhausting and embarrassing.

My pregnancy was difficult. I was suddenly having to navigate my way through life as a single mum, and when combined with my illness, it was really hard. I was having to go to the toilet constantly, which was mortifying. One of the hospital tests involved a camera being put up a part of my body that doesn’t exist anymore (a small blessing!) and I had to have a drug called prednisolone, which is a type of steroid. A common side effect is ‘moon face’, and sure enough, my face swelled. It also gave me chest pain and made it difficult to breathe, but I accepted that this was my life now. I had to methodically try each treatment and hope that one would work. Over a five year period, I had tablets, injections, infusions and even a form of chemotherapy. Eventually, these took their toll.

I’m a teacher, so my job requires 100% of my energy levels. I couldn’t just leave the classroom to go to the toilet, and I couldn’t make my pain obvious. I had to pretend that I was coping but really I was living only for my little boy. I tried to look for the light at the end of the tunnel, but I had no way of knowing how long the tunnel would be.

In the end, I decided to leave my job. I was so fatigued that I couldn’t work properly, and I had started having accidents at work. It was a soul-destroying decision. I left work and booked a holiday – how reckless! I thought that I needed some time out to spend with my little boy. As we sat on the plane, ready to jet off on our budget trip to Spain, Teddy started to scream. I tried my best to calm him, but he continued as I sat there, bright red and desperately needing the toilet. Suddenly, the screams stopped and Teddy giggled. A man behind me had made him laugh. I turned to see the person who’d managed to stop the crying and saw a handsome stranger. Sat there was my future husband. We started chatting, and by coincidence, we were staying in the same hotel. From that moment, we were inseparable. Taking time out certainly gave me a reward.

I had known Kieran for about three weeks when I almost had an embarrassing accident in his car. It was an old Rover, but still, you can’t poop in a boy’s car and expect another date! So, I told him about my illness. I explained that I was soon going to have a stoma and he didn’t care. He was great about the whole thing. My stoma (or future stoma, at that point) wasn’t going to alter how he felt about me.

I had my operation in 2012. With my stoma, I am able to be my son’s mummy again, and my husband gained a version of me that doesn’t walk around like a zombie. He probably misses the days when I was quiet! I am grateful for how much my ostomy has improved my life. I want to raise more awareness of IBD and for people to get a better understanding of how debilitating it can be. I’m lucky that I have been able to regain my freedom, but so many people are still suffering. I hope that I can help others, and that, one day, stories like mine will be a thing of the past.