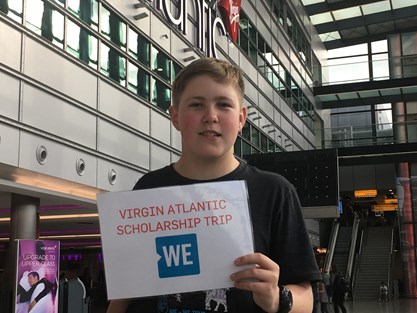 My Trip to India with an ACE Stoma

I was born with VACTERL Association, a collection of symptoms that affect various parts of the body. For me, these symptoms included an imperforate anus (meaning the opening wasn’t properly formed), neuropathic bladder and limb abnormalities. I needed to have surgery, which left me with an ACE (antegrade continence enema), a special type of stoma that allows me to flush my bowels. I also have a Mitrofanoff, which I use to empty my bladder with a catheter.

Because of my ACE and Mitrofanoff, my mum wanted to be sure that the event would be suitable for me. She spoke with Me to We, the charity that organises the event, and they explained that disabled participants had travelled with them previously. They said that my medical needs shouldn’t be a problem, so my mum and dad decided that, if I wanted to, I could go on the trip. With their help, I completed the application and sent it off.

A few weeks later, I had just returned home from school when I received a phone call. I was told that 30 people had been selected to receive the scholarship, and I was lucky enough to be one of them. I was going to travel to India!

Travelling with a Stoma

While I began to celebrate, my parents began to panic. ‘’How will he cope?’’ ‘’Will he be able to manage all his medical equipment?’’ ‘’What about his catheters?’’ I had much better things to be doing than worry – like playing on my Xbox! After years of helping to manage my condition, my parents knew exactly what I would need to take with me, so I left the organising to them.

Before I left, my medical equipment took some organising. For the three weeks that I would be away, I needed:

Because I needed to carry my medical supplies, my mum realised that I would need more luggage than the standard allowance. She contacted Virgin Atlantic and Air India, the airlines that I would be flying with. Virgin Atlantic was very helpful and agreed that I could take an extra bag. When she called Air India, they said I would need to provide a Fit to Fly certificate. It needed to be signed by my GP, but with only a week to go before the flight, this wasn’t an easy task! Luckily, my mum managed to organise the signature and get it to Air India just in time, and they gave me the luggage allowance that I needed.

Before the trip, Mum and I spoke with two of the facilitators who were also going on the trip. We told them that I have to catheterise and explained how I use my ACE for bowel washouts. They had no problem with any of it and said they were happy to help whenever I needed them, which reassured my mum.

I felt a little apprehensive in the few days before the trip, but the nerves really hit me when I was travelling to the airport. I was worried whether I would be able to manage and how well I would be able to look after my stoma and Mitrofanoff. I had never met the people that I would be travelling with and I was anxious about what they would be like. I finally met them when I arrived at the airport, including some of the facilitators who would be looking after us. To my relief, they all seemed nice.

I put on a brave face when I was saying goodbye to my mum and dad. I knew that if they saw me cry then they would cry too, and then we would all be blubbering! When everybody in the group had said goodbye to their parents, we headed towards security. I didn’t look back because I knew that seeing my parents would be enough to set off my tears!

Security was easy. I wasn’t asked any strange questions, and nobody gave me any funny looks! We went straight from security to the lounge, where we waited for a couple of hours until we boarded the plane. Next stop Delhi!