The worst and best time of my life - Richard's Story

My stoma story by Richard Tyas

The worst and best time of my life.

For as long as I can remember, I’ve had problems with my bowel. I had my first surgery at just six days’ old and my childhood and teens were one long experiment with diet and lifestyle. Every doctor I ever saw explained away my symptoms as a mixture of IBS and teenage angst. A diagnosis that basically reads as ‘pull yourself together young man.’

It was almost a relief when, in my early twenties, a specialist told me I had ulcerative colitis. This thing that had controlled my life finally had a name. It was no longer all in my head. Sadly, it was in my body. Not long after, I was properly diagnosed for the first time with Crohn’s.

I knew enough about Crohn’s Disease to realise that one day I might need to have a stoma and, my worse fear ever, a colostomy bag. I’d built it up so much in my head that I’d actually convinced myself I wouldn’t even survive the surgery. Little did I know then that I was capable of surviving much worse.

The other C word.

My peritoneal cancer was discovered through chance. I had a colonic diverticulum which filled and while the specialists were investigating that, an abscess developed and the cancer was found.

The Crohn’s was almost masking my symptoms as I have always had bleeding and things like that. But looking back, the warning signs were there. My wife pointed out how gaunt I looked in old photos. I would have never thought it was cancer though.

The best and worst time.

I can remember the exact moment I was told I had cancer. It was two weeks after my baby girl was born. There’s never a good time to be told you have the C word, but this was certainly the worst.

The news didn’t get any better either. I was expecting conversations about chemotherapy and psyched myself up to beat it, but it seemed as though defeat had already been accepted. I was thinking to myself, I’ve got cancer, and no one is going to do anything about it.

I didn’t really tell anyone, I kept it all to myself as I didn’t want people to worry. I was doing enough of that! My wife Sam took me to all my appointments and helped me to process it all, including being told there was a 25% mortality rate from the operation.

My daughter was three months’ old when my surgery came around.

It was a poignant day in more ways than one, it was also the date of my anniversary. As I lay there in London St Tomas hospital all thoughts of romance were replaced by a sense of dread and prayers that I would still be around next anniversary. 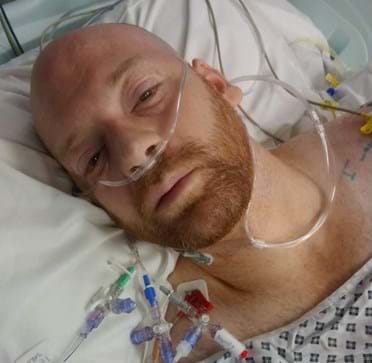 In the days after theatre, I was given the good news. The operation had been a complete success. The cancer was gone. But so was my bladder, colon, prostate, anus and rectum. Plus, most distressingly, all functions of my penis.

The first few days after surgery were the worst. I’d lost so much and gained two new stomas. To make matters worse (if that was possible!) I’d also got a phobia of blood. It’s no exaggeration to say that I didn’t even dare to look below my chest for three to four days.

By the time all the different departments had signed me off, the nurse wouldn’t let me leave until I had changed my own bag. All in all, I stayed in hospital for 15 days. And don’t tell my stoma nurse, but I never did change my bag before I was discharged.

Living with my stomas.

It was great to be home and back as a family again. But life didn’t get any easier. I’d lost my job, my self-worth and the first time I attempted to change my bag, I almost passed out on the landing! Luckily my amazing wife Sam was there for me yet again. For the first six weeks she did all my changes.

They say home is where the heart is and Sam has got the biggest heart of all. She’s amazing. While I was breaking down in tears, she was holding hers back. Looking after both me and our baby girl.

As time went on, I grew in confidence. I used hypnotherapy to cure my blood phobia and soon got used to changing my own bag.

I used to work as a night manager at a major supermarket, but after being signed-off I ended up taking voluntary redundancy to concentrate on my health and family. For me, work is important. Sam would rather I never worked again, but I’ve had a job since I was 16 and it would be nice to enjoy the financial security we once had.

It was hard being told that I wouldn’t be able to use my penis or have a sexual relationship anymore. That was a massive blow for me, especially when I’m only 37. Thankfully my wife has been amazing about it all – she’s never been bothered by it, but she often gets frustrated with my worrying.

Whenever I go out, I have a sports bag with clothes in the boot of my car and I always keep a pair of trousers in the glove box just in case. I had one issue once when I was in McDonalds and I ended up having to throw my trainers away as my inexperience with my drainable colostomy bag showed, with the content going all over the floor, the toilet door and all down my legs. I was sat in the car park with my trousers off with baby wipes trying to clean myself up. You soon learn from your mistakes!

In the early days I had quite a lot of blockages. I now try to avoid things like peppers, nuts and corn and anything with a skin but apart from that I tend to eat most things. Marshmallows are great for thickening up my output, a tip I learnt through social media.

How I finally got into the swing of stoma life.

Throughout my journey, I’ve always focused on my physical changes, while giving no thought to my mental wellbeing. I now realise that the two are just as important.

I felt ashamed about my stomas and always wore baggy clothes to hide them. In fact, I rarely left the house at all. Night-time was no better. I dreaded attaching the night bag and struggled to sleep because of the discomfort.

Something had to change and it did in the shape of four legs and three wheels. First, my wife Sam bought us a dog and once I’d got used to walking again, we got back to playing golf. 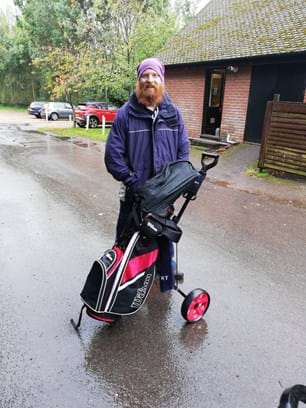 It was fantastic to be out on the course again in the fresh air. The rain couldn’t stop us and neither could losing my bladder, colon, anus, prostate and rectum! I still had to change my socks half way round, but this time it was simply because the grass was so wet.

Getting back into the swing did hurt a bit at first because of the scar tissue and also because during my operation my stomach muscles had been severely affected. Now I was relying on using the muscles I didn’t know I had.

To help, I now use a hernia support belt which gives me a bit more confidence. I wasn’t really told about them before I left hospital which I am sad about, because it’s a big boost to my body image. Before, I could feel my urostomy moving even with the slightest walk, but wearing the hernia belt helps to keep it in place. It’s also helped with my parastomal hernia, meaning it hasn’t got any bigger since.

The best thing is my confidence is improving! I’m back wearing my favourite clothes that actually fit me, rather than the less flattering XXL sacks I used to put on. And I now have three bags instead of just two, thanks to getting back on the fairways. 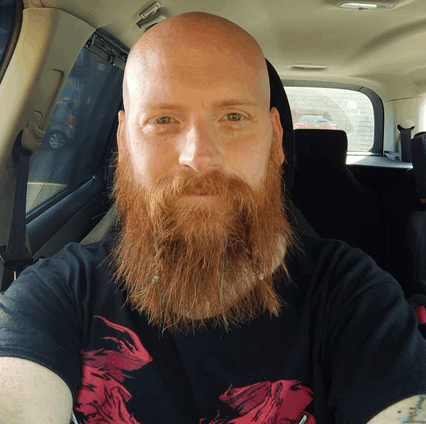 I now have my whole life to look forward to. I’ve stopped thinking about what I’ve lost and started to focus on everything I’ve gained.

Since my cancer diagnosis, my beautiful baby girl has been born, I’ve been able to spend more time with her, our two other children and my amazing wife Sam, we’ve got a fantastic new addition to the family, Sophie the dog and I’ve got a 4 inch beard that I’m really proud of.

True, my wife isn’t such a big fan of my new Viking look, but for me it’s symbolic to show how long I have beaten cancer for.

Now, I just want to get back to working full-time and of course, working on my swing!

If you’ve been inspired by Richard’s story and would like us to pass a message on, simply email meplus@convatec.com or if you’d like to contribute your own stoma story, just get in touch the same way.

Manage Your Mind After Stoma Surgery

In addition to the physical issues you face when recovering from stoma surgery, there’s also the hur

On Top of the World: Hill Walking with a Stoma Bag

Christmas with a stoma, all wrapped up

School, stress and my stoma