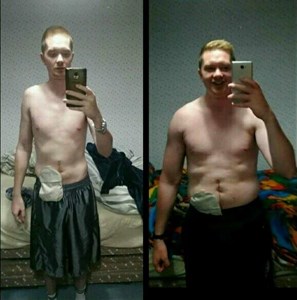 How My Stoma Changed My Life: My Experience Living with IBD

My stoma story began in January 2017, when I developed inflammatory bowel disease (IBD). At the time, lots of people were suffering from bugs and viruses. When I started to get symptoms in line with a stomach bug, I didn’t think too much of it, but after seven days, things got worse. I became concerned that it could be more serious. Throughout the night, I was waking every hour to use the bathroom, I was bleeding and I was in pain. I went to A&E and the doctors mentioned that I could have ulcerative colitis or Crohn’s, but it was probably a stomach bug. I was told to continue eating a balanced diet and see if the symptoms passed.

I spent the next two weeks trying to find ways to stop having accidents. I was cramming myself full of Imodium and trying to adjust my eating times. I was always worried about where the nearest toilet was, so the thought of a long car journey terrified me. I was losing weight, and after a further two trips to A&E, I was admitted to hospital.

Blood tests revealed high levels of inflammation and a sigmoidoscopy showed that I had severe bowel ulcerations. All of my symptoms were in keeping with Crohn’s and colitis. I was given immunosuppressive treatments, including steroids and infliximab, a form of biological therapy given intravenously. Lying in my hospital bed, I was afraid to turn because any time I moved I urgently needed the toilet.

The treatments started to take effect, and I was allowed to go home after a couple of weeks. I was given a huge bag of drugs, and although I was glad to be in my own home, the thought of potentially having to take medication for the rest of my life was daunting. My bowel movements were still not what I would consider normal. I was having to go to the toilet more frequently than I had before I became ill and it always felt urgent. I was trying to regain some normality, so I remained positive. I tried to bear in mind that things could always be worse.

Things did get worse. My health continued to deteriorate and I lost four stone. My temperature reached 42 degrees. I felt confused and disorientated and thought I could be having a stroke. I was frail and broken. I ended up back in hospital, where I discovered I had sepsis, flu and clostridium difficile, an infection of the bowel. The surgeons decided to perform an emergency ileostomy. I had fought this for so long, but there was no place for vanity. At this stage, it was about survival.

After my surgery, I felt like my life was coming back to me. I returned from hospital, medication free and feeling that I was regaining control of my life. I was able to sleep and my appetite returned. I had been home from hospital for six weeks when I started to do some light physical activity. Three months after my operation I had returned to a healthy weight, and after six months, I was able to return to kickboxing and hockey. Now, I can choose when to go to the bathroom (within reason!), but more importantly, I can live the way I used to before Crohn’s. Since my stoma, the little things in life have begun to mean a lot more to me. I have found a new desire to live.