A world of support in a global crisis.

In the space of a few short months, Coronavirus has infected the world. Turning from an epidemic in China to a pandemic reaching across every continent on the globe. Caught up in its wake are millions of travellers like Jake Yearsley.

Jake had embarked on a long-planned adventure to the Far East, exploring new cultures and volunteering for worthwhile causes, when news of the virus’s rapid spread broke. With dwindling stoma supplies, Jake relied on the kindness of strangers and the me+ community, discovering that even in a crisis, we’re all stronger together. Here’s his story, in his own words.

Sarawak, Borneo. The trip of a lifetime…

It’s interesting where we all find ourselves in a time of immense crisis and transformation.

I find myself stranded here in Sarawak, Borneo. I arrived on Feb 1st for a 2-month sabbatical, where I had planned to finally have a break from a relentless work life. My trip was also an opportunity to engage with the inner adventurer in me, that absolutely loves travel, exploring and having adventures. 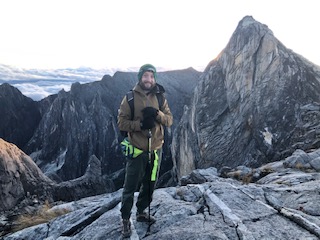 The trip was going well. I was participating on a volunteer programme with 11 other people from around the world which was due to end March 31st. The tour part of the trip involved travelling to an animal rescue centre for orangutans, sun bears and other endangered animals, followed by culture exchanges with Dyaks (indigenous tribal groups), in the Sarawak region.

The final leg of our trip involved going deep into the jungle of Batang Ai to stay in the remote regions of the Iban communities.

Cut-off from the rest of the world.

All part of the adventure.

We returned back to our host city on March 15th, when news of the world-wide urgency was beginning to set in.

I had been aware, like many of my fellow travellers, that COVID-19 was hitting the news, but we were uncertain of what this meant to us as foreigners in Malaysia.

That night we all got together to discuss our next moves. I had plans to continue staying in Sarawak as I was about to do a 2-week volunteer programme with the animal rescue centre we had visited in the first part of our trip. I had a few days rest in-between, so I booked a nice, quiet little resort not far away from the city.

I bid my friends goodbye and departed from the city, expecting to return in a few days to begin my volunteer programme. There was a little bit of uncertainty as to how this virus pandemic would play out, but there was no immediate threat. Maybe this was wilful ignorance, or idealism, I don’t know?

A lot can change in 4 days.

I returned to the city on the 19th March to await my volunteer programme to begin the next day.

We were meeting up at a hostel I had stayed in just days before and with the same company that had arranged my previous two-week tour. Upon arrival I was greeted with suspicion by the receptionist. “Do you have a room booked?” she said.

“Yes” I replied, “you know I’m part of the volunteer programme. I was staying here a few days ago”.

She went on to explain that the hostel was no longer taking on new bookings due to the government’s temporary lockdown. I asked to see the programme leader who again was surprised to see me.

Things were happening so fast that they hadn’t called to inform me that the volunteer programme had been cancelled.

I knew what I would need to do – GET OUT and retreat as fast as I could back to my lovely, quiet village. From there I could work out what to do.

The mood and conditions of my guest house were distinctly different to the city hostel.

It was calm, reassuring and peaceful. The guest house had a lovely swimming pool, beautiful rooms, a garden, and a quiet setting by the sea. Most importantly, it felt safe.

I began looking into the situation, both locally and globally, flight information and what was happening back in the UK.

In Sarawak, a 14-day travel ban had been imposed, so all borders would be closed, and we had been instructed to stay home. Most shops would shut, people were ordered to stay off work and only essential services would remain open. This would continue until March 31st.

Perhaps it was my surroundings, but I felt no pressure to take action. Flights were still scheduled to leave and mine were booked for March 31st. Everything was working out fine.

Over the next few days there was mounting tension. I was hearing the frightening news from the UK that the pandemic was spreading fast. Countries were closing their borders and airspace, while flights were quickly getting cancelled. The Malaysian government announced its extended travel ban and that was it, all my flights were gone!

I went into emergency mode myself, using all my previous Production Manager experience to concentrate on finding solutions, not problems. I booked new flights only to see them get cancelled the very next day. I contacted the UK Embassy and it was then that panic set in. There was no official help or emergency flights out. All of a sudden, I felt very alone.

I started worrying about my medicines and stoma bags. I had nowhere near enough of either for another month.

I persuaded my guest house owner to take me to the local pharmacy, who had bags but no baseplates. There wouldn’t be any more supplies for weeks. The next day, I went to the local village surgery and was again disappointed. I had only one other person to turn to.

I could always depend on me+

I knew I had to call on Mike, my Amcare stoma nurse. In my spare time at home, I work as a Counsellor for the service and if anyone could get stoma supplies to me, I knew it would be Mike and my colleague Karen.

My mood quickly lifted with messages from Karen saying that everyone from Amcare was trying to help me. Mike said he would try to find a contact for ConvaTec in Malaysia, remaining in constant communication.

After a few days, I was contacted by a lovely lady called Mildred. She was the ConvaTec rep based in Kuching, my local city. Mildred said she knew of my situation and was going to help me fast, since the warehouses were all closing and this was the last day to make orders.

I sent her photos of my stoma and explained my requirements. Mildred contacted me a day later to say she had sent two months’ supply of Esteem+ Soft Convex bags to a local pharmacy for me to pick up. 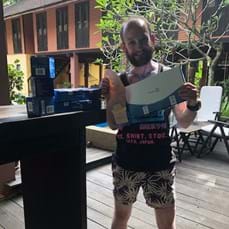 I was so happy, relieved and most of all, indebted to Mike, Karen, Mildred who proved once again that no matter where you are in the world or what challenges you are facing, the me+ and Amcare community is always here for everyone.

Amcare has maintained our standard opening hours of 8pm – 6pm, Monday to Friday and 9am - 1pm on Saturday. You may find at some times of day the phone lines become busier, but please allow a bit more time for your call to be answered or send us an email at enquiry@amcaregroup.co.uk if you’d rather, we are checking our answer machines and email box regularly.

We have been in touch with all manufacturers of stoma supplies and are pleased to report no issues with supply currently – so please don’t feel you have to over-order unless your GP practice advises so.