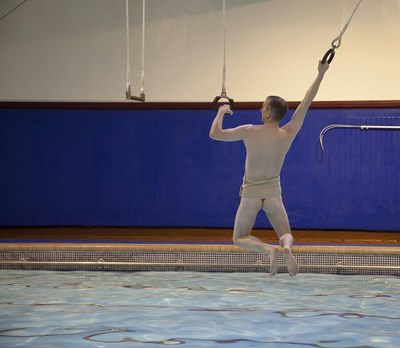 Naturism with a Stoma: How the heck did I get into this?

In November 2010, an endoscopy revealed that I had cancer of the cecum, a small pouch at end of the large intestine. The news was difficult to absorb. An MRI scan then showed that the cancerous bowl had fused with my bladder. As well as the cancer diagnosis, I was faced with the prospect of losing my bladder and large intestine, which meant I’d have to live with a stoma bag. Five days before the surgery, I attended the office Christmas meal, but I struggled to feel festive.

On the morning of my operation, a stoma nurse came to visit me. Reality hit me at the moment she marked where the stoma would be placed on my stomach. I had to lie down on the bed because I felt so faint. At that moment, my only thought was that I wanted to keep my bladder.

When I woke after the surgery, I asked if they had given me a bag. I was told that they had, and my world sank. My intestine, bladder and prostate had all been removed. The positive, though, was that the surgeons had managed to remove the cancer.

The subsequent chemotherapy brought some of the toughest periods of my life. It took its toll both physically and mentally. While I was recovering and off work, I had a lot of time to think. I worried how I’d cope, whether I’d have to change my lifestyle, what I’d do about dating. I wondered how I would ever get a girlfriend with a huge scar down my stomach and a bag of pee stuck to my side. I thought I looked like a monster.

After the chemotherapy, my body began to recover. The hobbies that had become impossible came back to me. I was able to return to abseiling, rock climbing and mountain biking. I began to think that my stoma was just another part of who I am, and I didn’t need to hide away. I wanted to fully regain my confidence, but I knew that in order for that to happen, I would need to do something drastic.

I read a magazine article about people who went swimming without swimming costumes. Nudists.

I thought that if I could try to be as comfortable in my body as these people seemed to be in theirs, then I’d be taking a step in the right direction. Not too far away, I found a group who swam naked twice a month. I went along, sat outside and watched people go in. It was 19 months after my surgery and I couldn’t find the bravery to join them, so I drove home without going in.

Four weeks later I went back, and this time, I went inside. I introduced myself and my stoma. ‘’Hello. I’m different. I wear a bag on my belly.’’ I was surprised at their response. ‘’Everyone is different,’’ they told me. ‘’Nobody will be bothered about your condition. You’re welcome to swim.’’

One of the scariest things about my first experience with naturism was the fear I’d be the only person without any clothes on. Once I was undressed, I popped my head out of the cubicle and, to my relief, saw a few bare bums heading to the pool. I wasn’t seen as a freak. I was just a normal person. Nobody was phased by my bag or my scar. I was elated afterwards, and I knew I had to try it again.

Now, it’s four years since I became a naturist and my body confidence is fully restored. I’ve been to many naturist events now, from a formal Burns supper, camping, a ceilidh and even bike rides. I found a swimming pool in Glasgow that has a trapeze and rings above the length of the pool. I spend a lot of time swinging back and forth, somersaulting on the rings and generally showing off. I wear a smaller bag at naturist meetings so that it doesn’t flap around.

Our clothes communicate parts of our identity. How someone is dressed can give us an idea of their job, their wealth and their tastes, and we can use clothes to control our image and give the impressions that we want to give. With naturism, there is no façade. Being naked puts everybody at an equal level.

I am completely at ease with my body now. I’ve tried lots of things as a naturist – I even did a handstand on the glass floor of Blackpool Tower while a TV crew filmed from below! After my surgery, a stoma nurse once told me ‘’don’t let it rule you.’’ I didn’t understand what she meant. It seemed inevitable that my stoma would take over my life. Now, what she said makes complete sense to me. My stoma is a part of me, but it doesn’t dictate how I live my life. When I dared to dip into the world of naturism, I found confidence.