A woman’s first wedding anniversary should be a special time. For me, it signaled a journey that began with symptoms I blamed on food I ate while traveling and ended with an ileostomy.

It was the spring of 2000, and my husband and I were taking a cruise to Mexico to celebrate our first year of marriage. A few days before leaving, I got diarrhea, which I chalked up to nerves. When it persisted, I blamed it on the rich food we ate on the cruise. But when we got home, I didn’t get better. About three months and a few ER visits later, a GI doctor and a colonoscopy confirmed a diagnosis of Ulcerative Colitis.

About 2 ½ years later, while trying to manage a life with UC, we got the wonderful news that we were going to be parents. My son was born in 2003, and while I was overjoyed at being a mom, my disease was a major problem. The diarrhea was constant, and at my worst, I would go to the bathroom about 45 times a day. It was hard to eat, sleep or function. Leaving the house filled me with anxiety, knowing I had to be near a bathroom all the time. Holding my young son was difficult because of the constant pain, and I have memories of nursing him on the toilet. This was not the life I had envisioned for my family.

One day, I heard about a procedure called a J-pouch, and after another colonoscopy that showed a bloody, pus-filled, ulcerated colon, I told my surgeon that I felt my colon needed to come out. He agreed.

In September 2004, I went in for one-step J-pouch surgery. However, I woke up with an ileostomy. It was a shock at first, but as I lay in my hospital bed, I realized that for the first time in five years, I didn’t have any urgency to use the bathroom. For me, that was life changing, which allowed me to accept my stoma.

I had been through mental and physical trauma, and the healing took time..

I had been through mental and physical trauma, and the healing took time.  But having been chained—night and day—to a toilet, and now having control over my life really made my road to acceptance and loving my stoma easier.

In 2011, I had what I hope was my final surgery. I had my rectal stump removed and was closed up using the sphincter sparing technique. In the years since my stoma, I’ve been involved locally and nationally with stoma support and advocacy. I continue to enjoy my life, share my story and reach out to others who are walking a similar road.

When I’m not traveling, I’m answering the phones and speaking with ostomates and their families. Often, I’m able to help them figure out what products work best for them. Through the me+ program, I’m also able to recommend so many resources to help with stoma and lifestyle issues, and get people on their way to managing their life the way they choose.

While I don’t think we necessarily have to love our stoma, being grateful and accepting what has happened is the greatest gift an ostomate can give themselves and those who love them. I am still happily married and raising my son, who really does not know me any other way. I have had some amazing experiences, traveling and enjoying many aspects of my life that just would not have been possible prior to having my stoma. 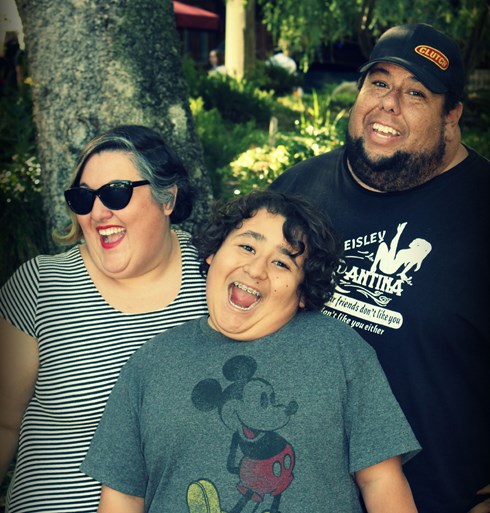 "I have had some amazing experiences, traveling and enjoying many aspects of my life that just would not have been possible prior to having my stoma."