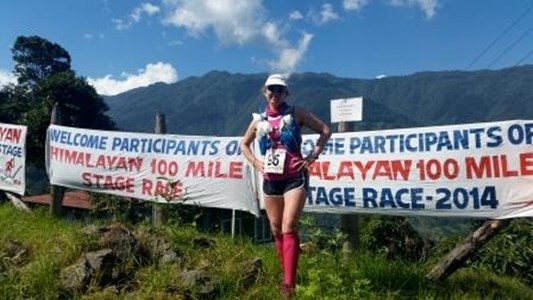 Running marathons when you have an ileostomy. Yes, it’s possible!

It’s been seven years since I had my stoma surgery. When I got home from hospital, I googled ‘What sports can you do when you have an ileostomy?’ I came across a climber called Rob Hill, who had scaled Everest. Then, I found a triathlete who had completed Kona Ironman World Championships. They both had stomas, and were living proof that incredible feats were possible, even with an ostomy. My goals weren’t as lofty, so if they could complete such extraordinary challenges, then surely I could run a few marathons.

I was already active before my stoma, but after the operation, I found myself yearning for more adventure. There’s nothing like a life-threatening surgery to make you seek some life-affirming experiences! I wanted to explore, to see the world and to live life to the full. I had an insatiable urge to fill my life with adventure. After my life was almost snatched away, I wanted to make the most of every minute.

Now, I have taken part in 21 marathons. Some of those were ultra-distance runs, which are runs that are over 26.2 miles in distance. Others were stage events, where the distance is divided into sections and covered on separate days. I recently took part in a stage event on the Isle of Wight, where I ran 70 miles in two days. 12 of those marathons have been completed since my last surgery.

I’m not an especially fast runner, but for me, running isn’t about being competitive. I am what’s known as a ‘running tourist’, meaning I blatantly use running events to travel and see amazing parts of the world. Running long distances is tough, and having a stoma adds to the challenge, but for me, having overcome that extra difficulty just makes my achievements feel even sweeter.

I want to share some of my experiences and adventures, but mostly, I want to share what I’ve learnt about running, travel and doing it all with an ostomy.

Jungfrau Marathon, Switzerland: My First Race with a Stoma

This was my big comeback run. I was only 9 months post-surgery, and I wasn’t confident I would complete it. The course was through stunning mountainous scenery, taking in 1500 metres of climbing. I ran with my husband and we crossed the line hand in hand. It was incredibly emotional and it remains the best day of my life.

As this was my first marathon with a stoma, I was petrified that something would go wrong. It didn’t, and I learned that running a marathon with a stoma is possible, even a tough marathon like this one. I was slower than my pre-surgery efforts, but the sense of achievement was incredible.

I also learned that the toilets on Swiss trains empty directly onto the track. The less said about that the better.

This race had been on my bucket list long before I became ill. When I had my surgery, I gave up on it, thinking it would never be possible. My confidence and fitness grew until eventually, I signed up. I flew to Delhi, full of trepidation.

Beyond the race itself, the conditions were tough. The facilities had no running water, so for five days, I was without a shower or toilet. The course itself was mostly at an altitude of 3500 metres, creating tough running conditions. At the time, I vowed never to do it again, but when the pain subsided, I started telling everybody I knew how amazing it was. I didn’t think it would be possible to complete such a challenge with an ileostomy, but against the odds, I did it. I realised during this race that hydration is the most important thing to get right. I experimented and developed a hydration strategy before the race, so I was well prepared.

Seeing the view of Mount Everest at sunrise was an unbelievable experience. My mantra now is ‘if I can get through bowel surgery, I can get through this’. Sometimes we are capable of more than we could imagine.

This one wasn’t a race, but a trip with my husband spent hiking through the mountains. We climbed Mount Toubkal, the highest mountain in North Africa, ate amazing food and threw ourselves into the Berber way of life. The Moroccan food was perfect for a stoma bag wearer, as well as being delicious.

Although I experienced high altitudes in my Himalayan trip, this time, the altitude caused problems with my stoma. My bag repeatedly inflated, until I was having to release air every few minutes, then I was hit with altitude sickness that caused vomiting and diarrhoea. In the end, my bag overinflated until it popped off. This was the day of our 20th wedding anniversary, and my stoma issues made for an interesting way to spend it! My husband was brilliant, immediately trying to help. If I experience high altitudes again, I will make sure to use a larger pouch and regularly empty it.

My husband might have preferred a relaxing week on a beach, but as his demanding, adventurous wife, I insisted otherwise. Having a stoma creates challenges, but for me, it was never devastating. It is a part of me that, most of the time, I can forget about. I know that there are far worse positions to be in. My pouch doesn’t stop me doing the things I love, and when I look at my circumstances in perspective, I feel grateful to be alive and able to do these things. Really, I am very privileged.

My Tips for Adventuring with a Stoma

If you have a stoma, you absolutely can have adventures. These are my three top tips:

Running marathons when you have an ileostomy. Yes, it’s possible!

Swimming with a Stoma

Exercise After Stoma Surgery: Back to Basics

A Clear Guide To Intimacy After Stoma Surgery